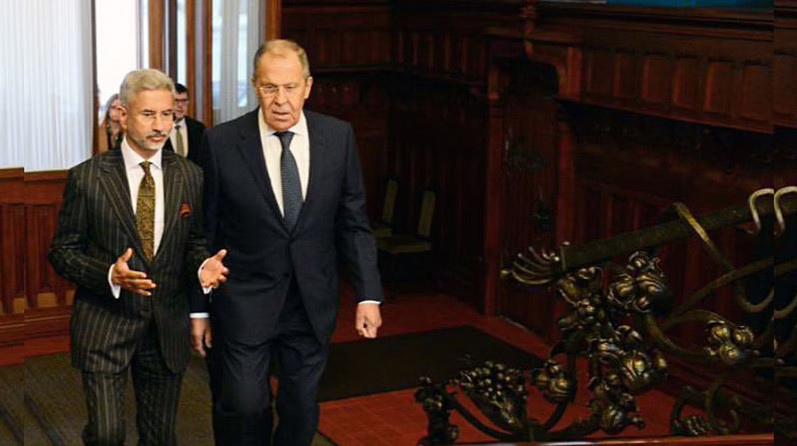 India said it has a “substantial, time-tested relationship” with Russia and both nations were looking at ways to expand bilateral ties that will make it “more durable, more sustainable, more balanced”.

S. Jaishankar, told his Russian counterpart Sergey Lavrov that India was “on the side of peace” referring to the Russia-Ukraine war. Jaishankar also said dialogue and diplomacy were the only ways out of the crisis.

“We have a very substantial and time-tested relationship with Russia. In the last few years, we have been finding ways of expanding this relationship, making it more durable, more sustainable, more balanced,” said Jaishankar, who was accompanied by a large business delegation on the trip.

At a joint press conference with his Russian counterpart, minister Jaishankar said, India will continue to purchase oil from Russia. ”As the world’s third-largest consumer of oil and gas, it is our fundamental obligation to ensure that the Indian consumer has the best possible access on the most advantageous terms to international markets. In that aspect, we have quite honestly seen that the India-Russian relationship has worked to our advantage. If it works to my advantage, I would like to keep that going,” he said.

On Afghanistan issue, the Indian minister said India will be joining the Russian format of talks on Afghanistan in order to have a dialogue with the Taliban.

“Any objective evaluation of our relationship over many decades will confirm that it has served both our countries very well,” he added.

Addressing the media jointly with Jaishankar, Russian foreign minister Lavrov said, “during the period of rapid change that the international community is going through, it is important to regularly coordinate our assessments and further plans to promote the achievement of all the objectives set by President of Russia Vladimir Putin and Prime Minister of India Narendra Modi in politics, trade and economic spheres, investment, and technology, as well as in cultural and humanitarian exchanges.”

India, which will assume the presidency of G-20 next month, also said the ‘Global South’ was the most affected due to the ongoing Russia-Ukraine war.

On the Ukraine conflict, obviously, the issue was a dominant feature, although we will continue to have discussions on it., Jaishankar said during his opening remarks at the bilateral meeting with Lavrov.

Reiterating Prime Minister Narendra Modi’s advice to Russian President Vladimir Putin that this was “not an era of war” Jaishankar added, “The global economy is simply too inter-dependent for a significant conflict anywhere, not to have major consequences elsewhere.”

India, strongly advocates a return to dialogue and diplomacy. We are clearly on the side of peace, respect for international law and support for the UN Charter,” he said.

Asserting the fact that India and Russia are strategic partners, Jaishankar chose to discuss other issues with Lavrov concerning cross-border terrorism. On the Indo-Pacific is concerned, both our nations have stakes in its progress and prosperity,” he added.

India will host the G-20 Summit in 2023. It remains crucial for the country to ensure that one of its closest strategic allies, Putin, attends the meet even though New Delhi continues to mediate between Russia and Ukraine.

On his part, Russian foreign minister Sergey Lavrov batted for greater military cooperation with India. “We had a detailed discussion on the prospects of military and technical cooperation, including the joint production of modern weaponry,” Lavrov said.

According to Lavrov, two-way trade between India and Russia increased by 130 per cent on a year-on-year basis till September 2022, reaching nearly $17 billion, and the target of reaching $30 billion in bilateral trade will be achieved “soon”.

However, according to Jaishankar, India is experiencing trade imbalance with Russia and he urged Moscow to address the issue. This came at a time when the West has criticised India for economically engaging with Russia, especially with regard to purchasing crude oil.

Lavrov said the India-Russia Inter-Governmental Commission, which is headed by Jaishankar and Russian Deputy PM Manturov, will continue to focus on expansion of trade, investments and connectivity between both sides.

Both sides also discussed the operation of the International North-South Transport Corridor as well as the Chennai-Vladivostok Eastern Maritime Corridor. They also discussed the establishment of the next phase of the Kudankolam Nuclear Plant.