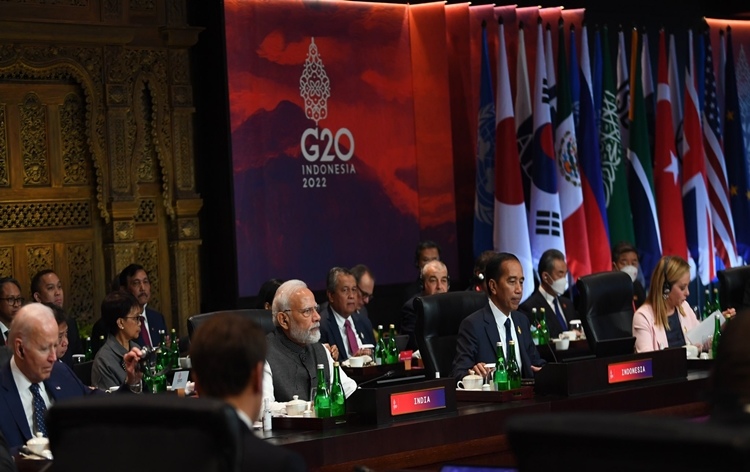 AKIPRESS.COM - India’s Prime Minister Narendra Modi, in his address at the G20 summit in Bali, Indonesia on Tuesday, underlined the global challenges of the Ukraine conflict, climate change and Covid pandemic and their impact on global supply chains. Today, world has greater expectations from G-20, relevance of our group has become more significant, he said, All India Radio News reported.

The Indian Prime Minister's statement on the Ukraine crisis at the summit is significant as India will assume G20 Presidency from the current chair Indonesia on December 1 amid the war in Ukraine.

On the Ukraine war, Modi said the world has to find a path to return to peace in the war-torn country, as he called for a ceasefire. The war in Ukraine - set to complete nine months on November 24 - has disrupted global food and fuel supply chain.

“I've repeatedly said we've to find a way to return to the path of ceasefire and diplomacy in Ukraine. Over the past century, the World War-II wreaked havoc in the world. After that, leaders of that time made a serious effort to take the path of peace. Now it's our turn,” he said.

PM Modi's remarks on the Ukraine conflict at a global platform, comes months after he told Russian President Vladimir Putin that “today's era is not of war”. He has - on multiple instances spoken to both Putin and Ukraine's President Volodymyr Zelensky over the conflict.

Referring to India’s G-20 presidency next year, Modi expressed confidence that next year when the G20 meets in the holy land of Buddha and Gandhi, we will all agree to convey a strong message of peace to the world.

“India's energy-security is also important for global growth, as it's the world's fastest-growing economy. We must not promote any restrictions on supply of energy and stability in energy market should be ensured. India is committed to clean energy and environment,” he further added.

By the year 2030, PM Modi underlined, “half of India’s electricity will be generated from renewable sources". “Time-bound and affordable finance and sustainable supply of technology to developing countries is essential for inclusive energy transition,” he highlighted.

Talking about COVID-19 pandemic, the Prime Minister said India ensured food security for its 1.3 billion citizens. At the same time, food grains were also supplied to many countries in need.

He said the current shortage of fertilizers in terms of food security is also a huge crisis. He added that today's fertilizer shortage is tomorrow's food crisis, for which the world will not have a solution.

He stressed on the need to build a mutual agreement to maintain the supply chain of both manure and food grains. He underlined, India is promoting natural farming and re-popularising nutritious and traditional food grains like millets for sustainable food security.

“And we have all failed to make suitable reforms in them. Therefore, today the world has greater expectations from the G-20, the relevance of our group has become more significant,” he added.

Ahead of G-20 session, Modi held brief discussions with world leaders on the sideline of the summit. He met with US President Joe Biden on Tuesday. During the interaction, the two leaders appreciated the continuing deepening of India-US strategic partnership and close cooperation in groups including QUAD and I2U2.

The two leaders discussed global and regional developments. PM Modi thanked President Biden for his constant support for strengthening the India-US partnership. He expressed confidence that both countries would continue to maintain close coordination during India’s G-20 Presidency.