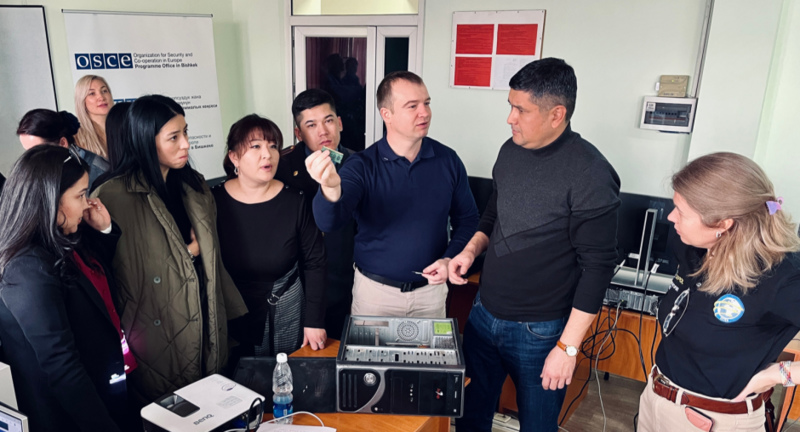 AKIPRESS.COM - The OSCE Transnational Threats Department, together with the OSCE Programme Office in Bishkek, organized a course on handling digital evidence by first responders at the Academy of the Ministry of Internal Affairs of Kyrgyzstan from November 14 to November 18, the OSCE press service reported.

"Digital evidence is important in investigating any type of crime. However, unlike physical evidence, data is very volatile and can be easily hampered, changed or deleted. Therefore, it is increasingly important that every police officer has at least basic understanding about handling digital evidence," Head of Politico-Military Department at the OSCE Programme Office in Bishkek Alexander Eliseev stressed during the course’s opening.

Around 20 representatives from the operational units of the Ministry of Internal Affairs as well as the Academy’s staff took part in the training.

The participants learned how to identify, seize and secure potential sources of digital evidence at a crime scene, to use open-source forensic tools for first responders, and to conduct basic live data forensics and deal with volatile data.

They were also introduced to basics of computer networking as well as online open-source investigations and anonymity on the Internet. Two expert trainers from Estonia and Moldova delivered the course.

"This week’s training is another manifestation of the excellent and long-term partnership that our Academy enjoys with the OSCE. We are pleased to host this course in a new computer classroom donated by the OSCE last year," Head of the Academy of the Ministry of Internal Affairs Tariel Abitov noted.

This training was delivered within the extra-budgetary project "Capacity Building on Combating Cybercrime in Central Asia", which is funded by the United States of America, Germany, and South Korea.