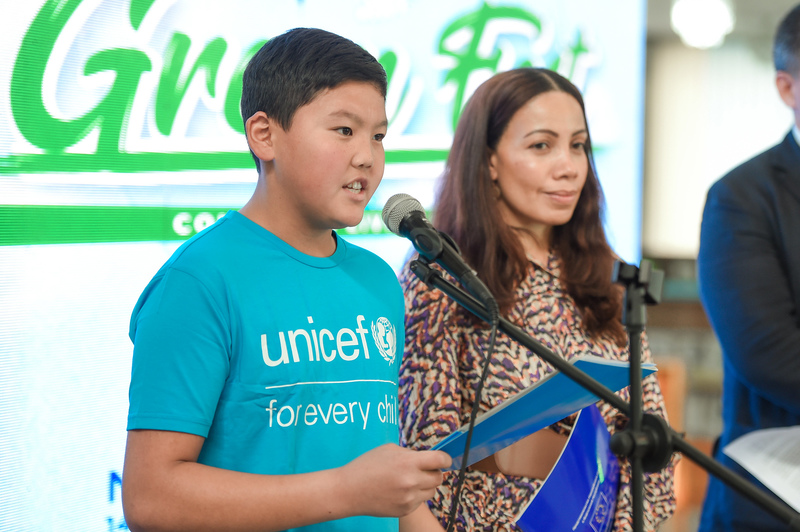 AKIPRESS.COM - The World Children’s Day is celebrated every year on 20 November to coincide with the anniversary of the adoption of the UN Convention on the Rights of the Child (UN CRC). The World Children’s Day aims to encourage children and young people to advocate for their own rights. This year, global activities are highlighting every child’s right to be protected against all forms of discrimination, regardless of gender, race, religion, disability, or any other status.

UNICEF together with partners celebrated the day in Kyrgyzstan with several events across the country. Events included: a Football Festival in Osh, an Art-Marathon with UNICEF volunteers, Kids Takeover and Go Blue campaigns.

Kids Takeover is an initiative, which allows children from around the world to takeover key roles in media, politics, business, sport and entertainment to voice their support for millions of their peers who lack education, protection and other basic children’s rights. In Kyrgyzstan, the Parliament, Osh Oblast Administration, the EU delegation, OSCE and Demir Bank participated in the campaign, led by UNICEF.

The Parliament of the Kyrgyz Republic invited 16-years old Saule Narynbekova to stage a session at the Social Affairs committee, where Saule raised concerns about ecology and education of girls, especially in Science, Technology, Engineering and Math (STEM). At the National Library in Bishkek, 15-years old Abdulkadyr Dyushenaliev co-chaired the opening of the ‘Green Festival’ together with the EU Ambassador, Marilyn Josefson, and talked about the project on smart bins to keep the city clean and promote recycling. 17-years old Shahida Amirova took over the Kyrgyz Republic OSCE Ambassador Aleksei Rogov’s position. Shahida talked in sign language and provided her insights on the topics of inclusion, tolerance and child rights. Demir Bank invited 15-years old Nurel Jailobaev to meet and interview General Manager L. Sevki Sarilar.

In Osh, 15-years old Amanda Sabirova took over the position of the Deputy Governor of Osh Oblast Administration and provided her reflections on access to healthcare in rural and remote areas. Another participant was Hadicha Bekmamat kyzy, a 9th grade student who acted as advisor to the Governor office and raised issues in education, such as lack of technologies at schools and proper hygiene promotion.

To mark this campaign UNICEF together with partners were encouraged to ‘Go Blue’ and turned iconic buildings in Kyrgyzstan blue. Buildings included the Historic Museum, UN House, the Mayor Office in Osh and Demir Bank’s main office in Bishkek.