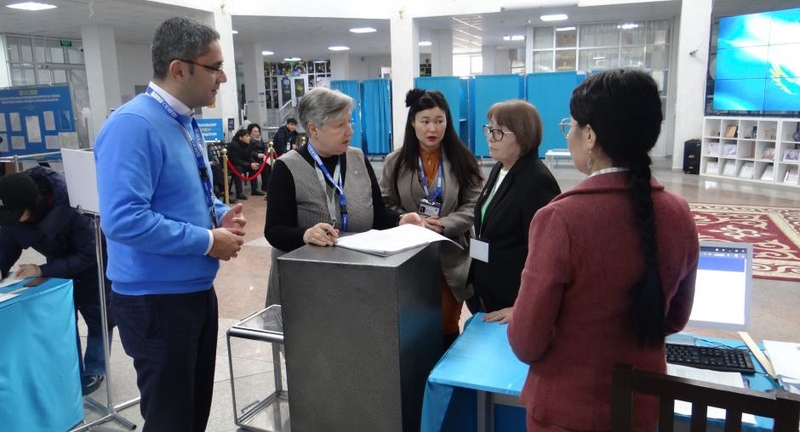 AKIPRESS.COM - The 20 November early presidential election in Kazakhstan took place in a political environment lacking competitiveness and, while efficiently prepared, the election underlined the need for further reforms to bring related legislation and its implementation in line with OSCE commitments to ensure genuine pluralism, observers from the OSCE Office for Democratic Institutions and Human Rights (ODIHR) said in a statement released on Monday.

The incumbent stood as the joint candidate of all parliamentary parties and, in effect, was not meaningfully challenged in a low-key campaign. The ability of citizens to participate fully in political life remains significantly constrained, including by limitations on fundamental freedoms, the observers said.

The election administration provided extensive voter information in the media, but scarce campaign coverage by the media and the virtual absence of analytical reporting, including online, limited voters’ ability to make an informed choice. The Central Election Commission managed the electoral preparations efficiently and provided comprehensive training for lower-level commissions. While procedures were generally followed during voting on election day, important safeguards were often disregarded in the counting and tabulation process, undermining transparency.

“A lack of pluralism played a significant role in undermining competitiveness in this election, and limitations on free speech and a lack of opportunity to conduct peaceful assemblies narrowed the space for critical voices,” said Urszula Gacek, Head of the ODIHR election observation mission. “We encourage the authorities to continue the ongoing reforms, including with respect to election-related laws and their implementation.”

Independent candidates are not allowed to run for president, and the eligibility requirements, including those concerning education, residency and experience in the civil service or elected government office, are at odds with OSCE commitments and other international standards, the statement says.

Freedom of speech and access to information, guaranteed by the Constitution, are limited by the restrictive legal framework and its uneven implementation. Combined with cases of intimidation and attacks against journalists, this results in self-censorship and lack of scrutiny. All television stations monitored respected legal provisions for equal coverage in the news.

The Constitution, the Election Law and other election-related legislation have been revised several times. Of the latest reforms, only the change to a single, seven-year term in office for the president applied to this election, and previous ODIHR recommendations remain unaddressed, and the legal framework is not fully consistent with international standards and OSCE commitments for democratic elections. Positively, recent digitalization initiatives in the justice sector have facilitated the procedure of complaint submission and increased the responsiveness of state bodies, and the disputes were transferred from civil to specialized administrative courts.

“With the anticipated parliamentary elections coming soon, there is an opportunity to address the issues identified in the statement, including with regard to counting and tabulation procedures to safeguard the transparency and integrity of the vote,” Gacek said.