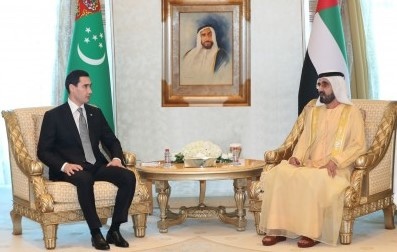 The head of Turkmenistan conveyed warm greetings to the Prime Minister of the UAE from the Chairman of the upper house of the Parliament of Turkmenistan Gurbanguly Berdimuhamedov, the Foreign Ministry reported.

During the meeting, the sides exchanged views on the prospects for further strengthening interstate ties, as well as on some international and regional issues.

The interlocutors expressed their common desire to bring cooperation to a new level. In particular, emphasis was placed on the planned opening of a specialized store selling Turkmen carpets in Dubai.

Another important tool in the development of trade and economic relations between the two countries is the establishment of ties between entrepreneurs, the President of Turkmenistan noted. It was emphasized that a business forum on cooperation between the Chamber of Commerce and Industry of Turkmenistan and the Federation of Chambers of Commerce and Industry of the United Arab Emirates will be held as a part of the visit.