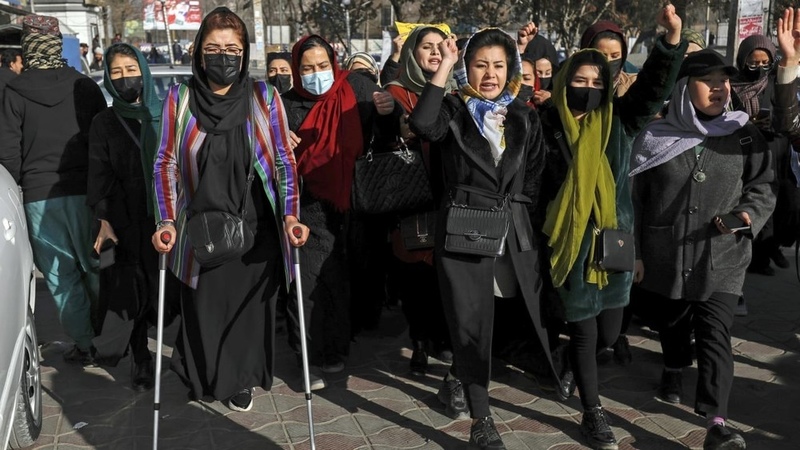 "Rights for everyone or no one," the women chanted as they marched through the streets in the western part of the capital, Kabul, home to the country’s largest universities.

Eyewitnesses said the protests in Kabul were quickly shut down by Taliban security officials and that at least five women and a couple of male protesters were arrested. Sources connected to women activists confirmed two of those arrested were released.

"The Taliban forces beat us up and arrested some of our female and male protesters and took them away. They scattered us apart. However, we will not let it go. We will fight for our rights," one of the female protesters, who asked that her name not be used for fear of Taliban retaliation, told VOA.

"We went to the university to give our exam; our male classmates were able to get in the hall, but we were not allowed by the armed Taliban forces. They kicked us out of the university with violence and cruelty, as if we had committed a huge crime. We have four exams left. What is going to be our future?" one female student from Nangarhar University said who asked not to be identified for safety reasons.

"I had studied and prepared for my exam until very late that night. As soon as I woke up and saw the news about the ban, my dreams shattered. I started crying. Why are we treated as criminals? We have no respect and no values for these people," student at Kabul Medical University Bahar Ahmadzai noted.

The ban was announced Tuesday, a day before the universities’ final exams.

Following broad condemnation of the move, the Taliban’s higher education minister, Neda Mohammad Nadeem, defended the decision in a post on Twitter.

"The Nation is angry with me because of the closure of girls' education, while this is the order of the Messenger of Allah," the tweet said. "Islam does not allow women to do prostitution in the name of education. A woman is like a piece of land owned by a man, and she is obligated to be at his service, not perusing education".

In the eastern city of Nangarhar, some male university students also walked out of their exams in protest against the Taliban’s decision to ban female students from higher education.

"We did not attend the exam and we will not until our female classmates are allowed to take exams, too," one male student, who also declined to provide his name, said.

On Wednesday after female students were not allowed to take part in the exams, several male professors from various universities in multiple provinces resigned in protest.

"I and some of my colleagues resigned in protest against this dark day. We will not return to the university unless the decision is revoked by the Taliban," Obaidullah Wardak, assistant professor at Kabul University, said.

Afghan writer and human rights activist Shafiqa Khpalwak called the ban on girls' education a crime against humanity. She asked the international community and Islamic countries to step forward and help the Afghan women in this fight against extremism.

"Afghan women are alone in this fight against radicalism. They need help!" she said.

Lida Afghan, a Danish-Afghan artist whose art highlights social problems and women’s rights, said it is time for the world to stand with the Afghan women.

Several countries including the United States and the U.N.'s mission in Afghanistan asked the Taliban leadership to "immediately" revoke the decision.