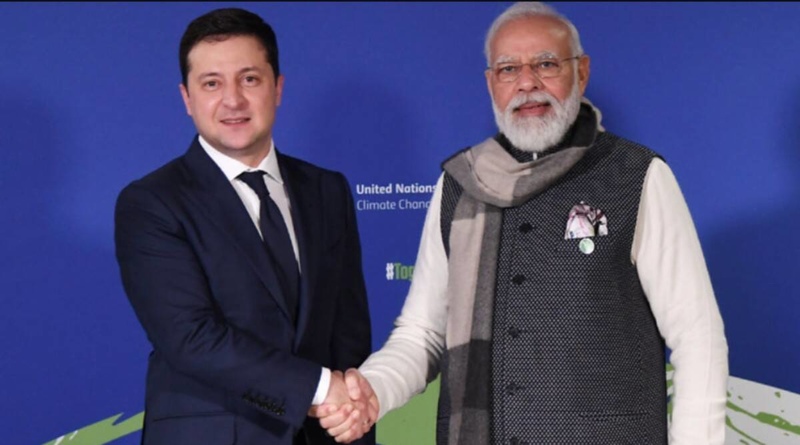 This is the fourth telephone conversation between Modi and Zelenskyy since February 24 when Russia – Ukraine conflict began.

The conversation on Monday came at a time when India is seeking to strengthen trade relations with Moscow while Western nations introduce new measures to limit Russia’s funding of its military action in Ukraine.

“I had a phone call with PM Narendra Modi and wished a successful G20 Presidency,” Zelenskyy wrote on Twitter. “It was on this platform that I announced the peace formula and now I count on India’s participation in its implementation.”

His formula calls for withdrawal of Russian troops from Ukraine, release of prisoners, restoration of Ukraine’s territorial integrity and guarantees on nuclear safety, food and energy security.

The Zelenskyy-Modi phone call came 10 days after Russian President Vladimir Putin spoke to Modi and discussed the situation in Ukraine and India-Russia bilateral ties. This was their fifth phone conversation this year since the beginning of Russia – Ukraine conflict.

The Indian government said in statement that the Modi and Zelenskyy discussed opportunities for strengthening cooperation. “Prime Minister Modi explained the main priorities of India’s G20 presidency, including giving a voice to the concerns of developing nations on issues like food and energy security,” it said.

While Modi and Zelenskyy spoke to each other in February and March this year, which were mainly about evacuation of Indians from the war zone, in their last conversation on October 4, Modi had told the Ukrainian President that there can be no military solution to the Ukraine conflict. The two leaders had their last meeting in Glasgow in November 2021 on the sidelines of the COP-26.

India, which has not explicitly condemned Russia’s invasion of Ukraine, has emerged as the largest buyer of Russian oil after China. Western sanctions have targeted Russia’s fuel and energy products, which are its biggest exports and money makers, but this month, India bought barrels of Urals crude oil at well below a $60 price cap agreed by Western nations.

India’s External Affairs Minister Dr. S. Jaishankar has said that a country with huge energy demand where income levels are not high has to look after its own interests as he called Russia “a steady and time-tested partner”.

The Reuters news agency reported last month that Moscow had sent India a list of more than 500 products it needs – including parts for cars, aircraft and trains – as sanctions squeeze Russia’s ability to keep vital industries running. India, too, has sent the Kremlin a list of Indian products that need access to the Russian market, according to the foreign minister. New Delhi is seeking to balance bilateral trade, which is now tilted towards Russia.