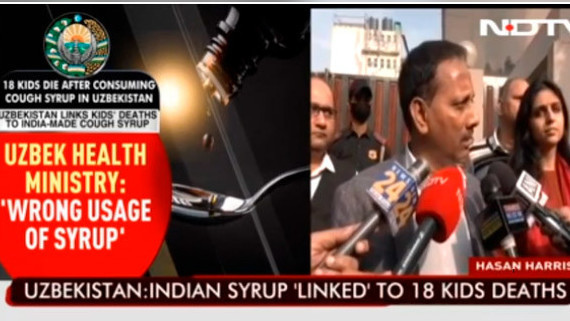 AKIPRESS.COM - The Central Drugs Standard Control Organization (CDSCO) said on Thursday that it has initiated a probe in connection with the death of 19 children in Uzbekistan allegedly linked to a cough syrup manufactured by an Indian firm, SK Today News reported.

Official sources said the Drugs Controller General of India has sought more information regarding the incident from the Uzbek regulator. An inspection jointly conducted by the central drugs regulatory team of the north zone and the state drugs regulatory team was also taken during which samples were lifted.

Hasan Harris, the legal representative of Marion Biotech, said the governments of both countries are looking into the matter and inquiring. “There is no problem from our end and no issue in testing. We have been there for the past ten years. Once the government report will come, we will look into it. For now, the manufacturing has stopped,” Harris said.

According to the ministry, the chemical ethylene glycol was found in a batch of syrup during laboratory tests. Earlier this year, the death of 70 children in Gambia was linked to cough syrups manufactured by Haryana-based Maiden Pharmaceuticals following which the Haryana-based unit was shut down for violation of manufacturing standards.

However, later the samples tested in a government laboratory in India were found to be complying with specifications.

Uzbekistan has registered 19 deaths among children, who used Doc-1 Max. All victims are children under 6 years. Use of the drug was prohibited in Uzbekistan. Doc-1 Max syrup and tablets were seized. Criminal probes were launched into lethal outcomes of children. Several officials, involved into registration of the medicine, its import and sale, were arrested.
Related content
WHO issues warning about danger to health of Ambronol and Doc-1 Max after 20 kids deaths linked to their use in Uzbekistan
Death toll from use of Indian cold syrup rises to 20 in Uzbekistan
Uzbekistan suspends sale of all medicines from Indian company Marion Biotech after children's deaths