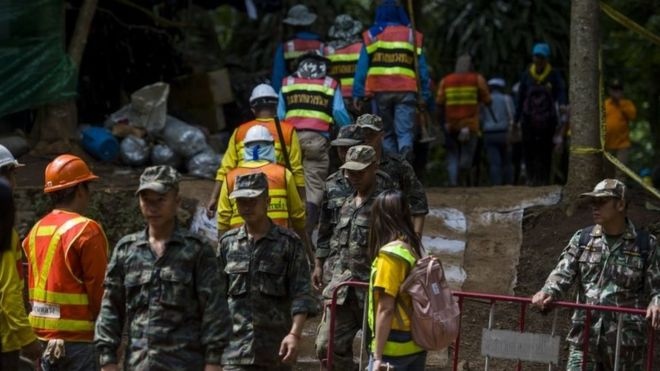 AKIPRESS.COM - Petty Officer Saman Gunan lost consciousness on his way out of the Tham Luang cave complex, where he had been delivering supplies, BBC reports.


"His job was to deliver oxygen. He did not have enough on his way back," said an official.

He was brought out by his dive buddy but could not be revived.

PO Saman Gunan had left the navy but returned to help the rescue operation.

Said to be an avid runner and cyclist, he was part of a massive rescue operation launched after the group found themselves stranded in the Tham Luang cave by flooding.

"Inside the cave is tough," Thai Seal commander Rear Adm Arpakorn Yookongkaew told reporters. "On the way back from setting up oxygen bottles, Petty Officer First Class Gunan passed out."

But he said the search operation would go on.

Around 1,000 people are involved in the rescue operations, including navy divers, military personnel and civilian volunteers.

PO Gunan's death has underscored the dangers behind the search efforts.

Rear Adm Arpakorn said the team still had "faith" to carry out their work.

When asked how the group could make it out safely if an experienced diver could not, he said they would take more precautions with the children, who are aged between 11 and 16, and their 25-year-old coach.