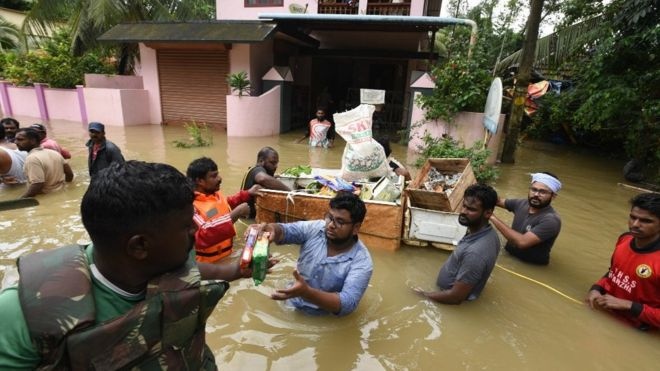 AKIPRESS.COM - About 22,000 people were rescued from the flood-hit Indian state of Kerala on Sunday, officials say, after monsoon rains finally eased, BBC reports.


Military teams as well as disaster response forces and local fishermen reached some of the worst hit areas.

More than 350 people have been killed, most of them in landslides, since the monsoon started in June.

But he vowed on Sunday "to save even the last person stranded".

Meanwhile, the head of the state's disaster management team, Anil Vasudevan, said he was preparing to deal with a possible outbreak of waterborne and airborne diseases in temporary relief camps.

Rescue officials said efforts on Sunday had been concentrated on the town of Chengannur, where about 5,000 people were reported to be trapped, and in the Alapuzha and Ernakulam districts.

In Chengannur, local politician Saji Cherian earlier broke down in tears on TV describing the crisis there.

"Please give us a helicopter. I am begging you. Please help me, people in my place will die. Please help us. There is no other solution, people have to be airlifted," he said.

Survivors at evacuation centres have described spending days without food or water.

"They were the scariest hours of our life," 20-year-old Inderjeet Kumar told AFP news agency from a church shelter in the stricken Thrissur district.

"There was no power, no food and no water - even though it was all around us."

India's Prime Minister Narendra Modi surveyed the state from the air on Saturday, and has promised an immediate grant of 5bn Indian rupees (£55m; $71m).

Initial estimates suggest the floods have caused £2.3bn of damage, AFP reports, but this is expected to rise.